July 16, 2016
Slow Food Norwich had heard of Norfolk Saffron several times over the past few years but my friend Aviva then took part in a workshop with Sally from Norfolk Saffron near Burnham Market in north west Norfolk, Aviva was then able to tell me more about this interesting artisan saffron producer and I managed to meet Sally for the first time in 2013 and she told me then about her very interesting business and the very interesting history of saffron growing in north Norfolk.
Sally who started and runs Norfolk Saffron is an Oxford trained botanist with a doctorate in plant pathology, she is helped in busy periods by her family and especially by her mother Jill who is the reason that saffron growing has returned to Norfolk.
Norfolk Saffron is based in the family smallholding in the pretty village of Burnham Norton on the north west Norfolk coast, the land has been in the family since 1935, but Sally only started growing Saffron there in 1997 after her mother gave her 20 saffron corms as a birthday present. By 2009 there was too much saffron being grown just for personal or indeed for use by the whole family and Sally decided to go into commercial production and with the help of RDPE funding the new business was born. 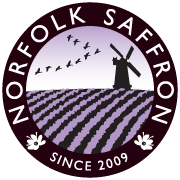 Norfolk Saffron continues the ages old practice of growing saffron on the north Norfolk coast, in the past much of the saffron grown and processed in this part of Norfolk was sent across to Holland via the small port of Wells next the Sea but this stopped many centuries ago.
Sally now sells her bottled saffron, two types of saffron flour and her saffron liquor at local farmers markets, large annual food and drink festivals, also some is sold in shops in north Norfolk and increasingly she is selling her saffron on line, she also has set up a small saffron museum in Burnham Norton.
Slow food Anglia is now planning an application to Slow Food International to get the saffron granted Presidia status from the Slow Food Foundation for Biodiversity and we hope to start the process whicl attending the Salone del Gusto Terre Madre held in Turin in late September. 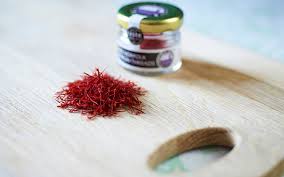 Aviva Leigh who originally introduced me to Sally from Norfolk Saffron is based near Norwich, she designs and makes contemporary textiles that celebrate artisan skills, using natural dyeing including saffron, hand weaving and also felt making. She currently has a studio in a beautiful old merchants house in the centre of Norwich and runs courses and workshops both in Norfolk and other parts of the UK.
Aviva is inspired by a ‘slow making’ ethos that embraces the use of sustainable and zero-waste processes and considers the provenance of all materials that she uses. She works mainly with natural dye stuffs, often grown locally, and is passionate about connecting personally with the process of creating colour, from sowing the seeds to processing the pigment and dyeing the fibres.
Last year Aviva opened a new workshop and studio in Happisburgh on the north Norfolk coast but also continues with some work in Norwich as well. 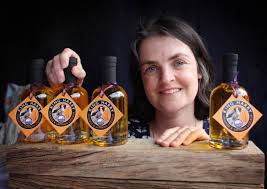 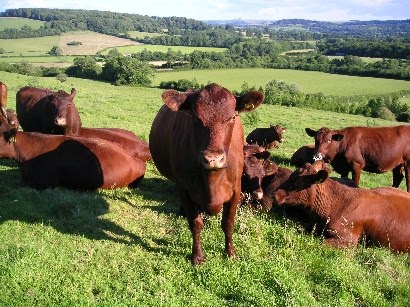 As part of the Forgotten Foods project that Slow Food England and Norwich undertakes to promote we have come across this rare breed of cattle which are now reared on the Royal estate at Sandringham in West Norfolk. The Red Poll cattle breed is a dual purpose breed of cattle and is a cross between the Norfolk Red beef cattle and the Suffolk Dun dairy cattle breeds, and unfortunately both these East Anglian breeds of cattle are now extinct. The breed was developed in England in the late 19th century and the cattle are unusual in that they naturally polled, that is the breed is without horns. Red poll were introduced into Australia and also the USA in the 1800's and is the oldest registered breed of cattle in the US having been established there for over 125 years. The Red Poll cattle society was established in 1888 to promote the breed and also their use within the livestock industry in the UK and abroad, but since the middle of the 20th Century the use of the Red Poll breed for b 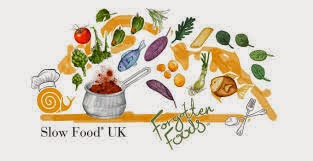 The Forgotten Food programme is an important element of the work that the Slow Food organisation in the UK and also throughout the rest of the international Slow Food movement undertakes as part of its work, and we in Slow Food Norwich and in East Anglia are pleased to be working with the owners of the Fire Pit Camp in Wendling Norfolk to hold the first major Forgotten Food Festival in England. The Festival will be held on Saturday June 6th and Sunday June 7th at the Slow food Market at the prestigious Rosewood Hotel  in London, and we are very excited to be holding both these events with the help and support of Rachel and Sarah from  The Fire Pit Camp  who are also active members of Slow Food Norwich. We worked closely with them last year when we held a joint Slow Food and Norfolk producer Festival at their beautiful venue in the small village of Wendling in central Norfolk and look forward to being involved with them again. The Fire Pit Camp is a popular and well known venue in cen